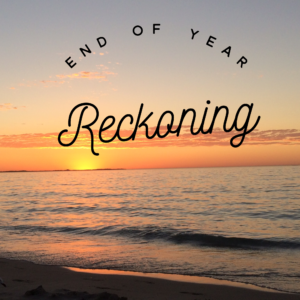 You know how Facebook does that thing, flashes up a memory that you can then share, or not… Last year’s Resolutions – or rather Intentions written in December 2015 showed up with the invitation to share. Of the four Intentions, none were actually reached, although much work was done towards them. I had no urge to press the “share” button.

But, it’s Reckoning time. So in my own time Facebook, I am sharing this image.

So I didn’t get to finalise the first draft of my novel, then called Without Consent, now titled Shakespeare Street, nor did I develop a flourishing author platform and due to lack of completed manuscript I did not get a book deal. I certainly did more media than last year and there was at least one blog that I felt hit the mark. But still. Awkward.

Most of which wasn’t even on the List. And I am trying to do two things at once – run a not for profit AND write my first novel. So, you know. Ease up.

This luscious Christmas holiday break I have spent some time doing the Marie Forleo Thang of reviewing my 2016 with these three questions:

And also looking at Danielle La Porte’s Five Questions for your Deeper End of Year Review:

So now it’s time to declare my 2017 Intentions.

Do you love this time of reflection and thought? Are you going to set yourself any Intentions/ Resolutions/ Grand Dares? Maybe 2016 was not your year. So many people I know have found it a testing and trying year both at the awful, train-wreck macro-level of Brexit and Trump, as well as personally.

If you want to have a try at Desire Mapping your 2017 with me, you have the chance to think about how your Goals/ Intentions/ Resolutions/ Grand Dares will make you feel. Those feelings are important. They show how you most want to feel and can be identified, named as your Core Desired Feelings. These feelings can become your compass for your year. If you want to go through this process with me, my course link is here. Or, you can discover more about Desire Mapping for yourself.