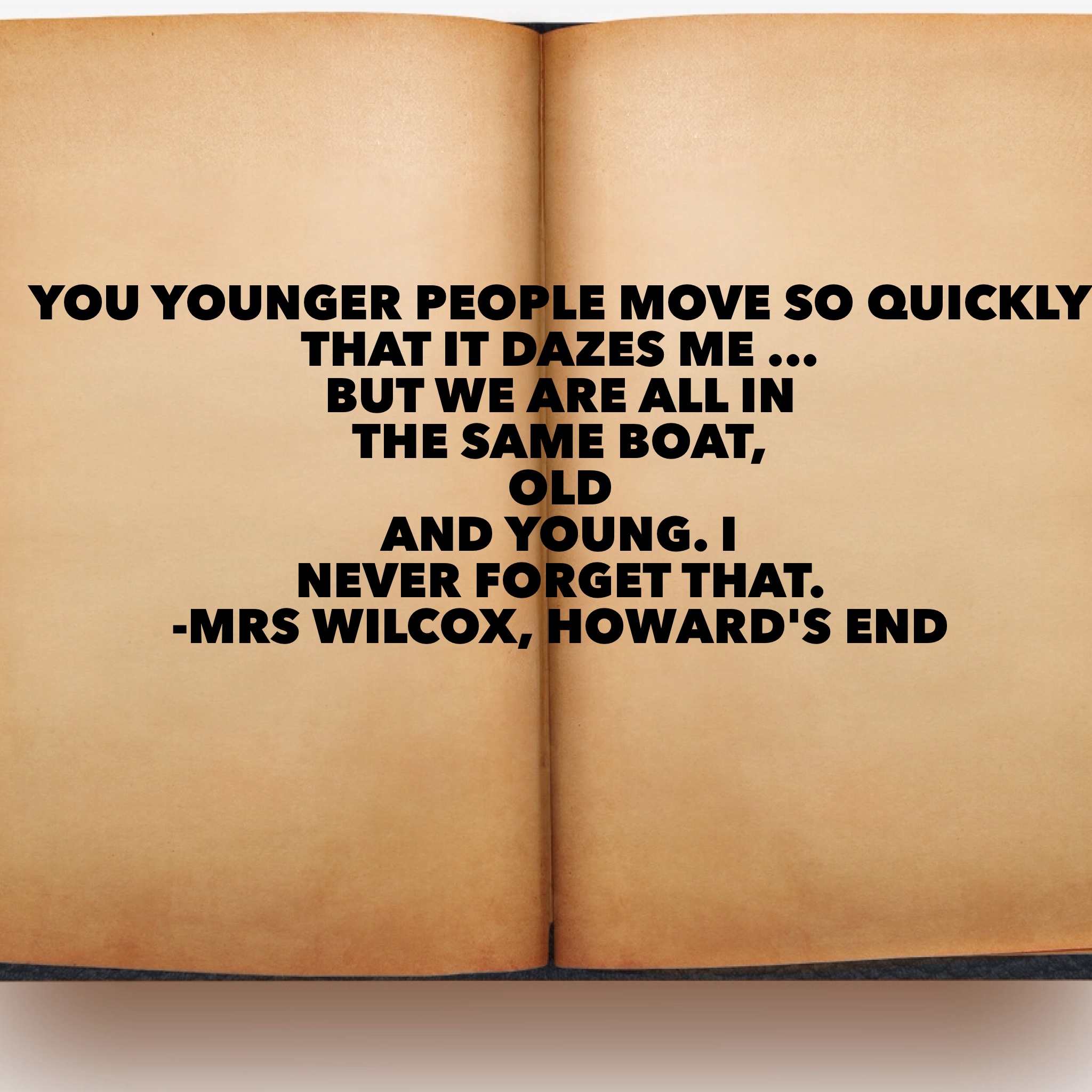 It’s many years since I first read Howards End but every now and then I am reminded of just how much I love this book. Tackling a novel that covers death, money and the complexities of friendship. Not very ambitious, surely? The quote I chose to put into a picture is from a conversation Mrs Wilcox (spiritual owner of her beloved home Howard’s End) and Margaret Schlegel (a younger woman friend and, spoiler alert, spiritual heir of the beloved Howard’s End). Margaret is a highly intellectual 30 something Londoner, and Mrs Wilcox is a 51 year old housewife with a grown family. Margaret has unwisely tried to mix up her “smart London set” with Mrs Wilcox;

“The little luncheon party that she gave in Mrs Wilcox’s honour was not a success. The new friend did not blend with the ‘one or two delightful people’ who had been asked to meet her, and the atmosphere was one of polite bewilderment”

Mrs Wilcox was “not an intellectual, nor even alert, and it was odd that, all the same, she should give the idea of greatness”

Margaret can see how little enjoyment Mrs Wilcox had from attending, and when they have a private conversation outside the drawing room, Mrs Wilcox makes this comment “we are all in the same boat, old and young. I never forget that”.

I just love how after this exchange, they shake hands, the friendship re-kindled from the ill-considered lunch. Their friendship is dissected in several parts of the book, including when Margaret feels that Mrs Forster has stretched out the hand of friendship, and then withdrawn it. While this is known as flirting in sexual relationships, in friendships there is no such equivalent, and yet the pain of the tentative and newly formed friendship is sometimes as acute;

no law–not public opinion even–punishes those who coquette with friendship, though the dull ache that they inflict, the sense of misdirected effort and exhaustion, may be as intolerable.

I often think of the emphasis this book places on friendship, which so often takes a back seat to the romantic relationship, or the family connection.

Does this resonate with you? Is friendship something that has caused you almost as much pain as romantic love gone wrong?