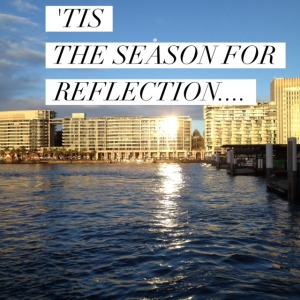 There’s something about the end of the year that calls for reflection. On what you achieved in 2014, and what will now be on the to do list for 2015. But more than anything, it calls for a building on strengths. Do not berate yourself for what you did not do; look at what you did achieve and spend some time thinking about why you didn’t achieve other things. It may just be that you don’t want to do those things, not really. In which case, get rid of it!  ‘Tis also the season for a culling, a getting ready for 2015 and a renewal of commitment and passion.

An Invitation
Here’s an invitation to try a 2014/2015 reflection exercise; I am paying forward the love from my coach, Susie Ascott who suggested this to me:

As you are reflecting on your year, here are some guiding principles, heavily influenced by great work by great women that I have been reading over 2014.

If you haven’t heard or seen of the work of Danielle La Porte,  now may be just the perfect time to have a look at her work on Desire Mapping. Essentially her Desire Mapping book and products support you to think not about what concrete tasks you want to do, but how you want to feel when you achieve those concrete tasks. It gets you thinking about your desires and goals in a fresh and empowering way. If you think about why you want to do a project, it really helps to connect you with the why.

2. Don’t hate on yourself

I feel like I may have been late to the Brene Brown party, but I absolutely love her work on shame and shame resilience in Men, Women and Worthiness. In this work she talks about how shame has different triggers for men than it does for women. For women, we tend to feel shame when we don’t have it all together; say for example when we haven’t achieved what it is we set out to do in 2014. She makes the vital distinction between shame and guilt. With shame, you become the fault, with guilt, you identify the fault as a behaviour, not as you. So when thinking about your 2014, the shame response might be; “I am useless”, whereas the guilt response would be; “I didn’t get these things done”. The shame response does not allow you to move forward positively; the guilt response reminds you that where you are is not where you want to be, and spurs you into action. It may also be important to think about why you didn’t get it all done; perhaps you were asking too much of yourself. It is a tendency we women have.

3. Ten Agreements – Our Responsibilities and Opportunities

During the year I met 10 times over 20 weeks with a group of women to study The Ten Agreements. It was a wonderful opportunity to think deeply about what is different about being a woman and how this affects your experience of spirituality. The overarching message I took away is that women in the Western World have unprecedented opportunities and freedoms and this creates an amazing opportunity and responsibility. Agreement Three, for example, is to “Accept Sole Responsibility for Creating the Future… I take responsibility to consciously evolve so that, for the first time, women can deliberately define our co-creative role in culture.” That is a wonderful foundation to think about 2015; co-creating our future.

So enjoy your time of reflection; be gentle on yourself and dream big!