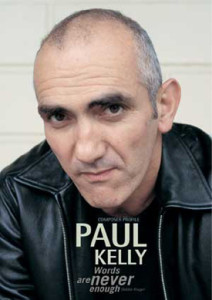 I am old enough to recall going to the Herdsman Hotel in Perth in 1990, to catch the last set of a Paul Kelly gig before leaving for Europe. No queue, no charge. All the time I lived in Europe, which was pretty much all of the 90’s, I never stopped playing his music.  It drove my Northern flat mate around the twist.  She didn’t get Paul Kelly; he is our voice.

While I thoroughly enjoy all his new material, there are two songs of his that have prodded painful feelings, difficult to articulate. They were a lament, and finally, a call to action.

My karma became entangled with another person’s when he intruded into my home and assaulted me.  I of course reported it, but 14 months passed before he was found.

I had never been a fan of the prison system, no doubt deeply coloured by the experience as a young adult of visiting a friend in maximum security (at the medieval Fremantle Prison before it became a museum).

After the strange limbo of 14 months of not knowing who this person was and if he had struck again, abruptly he was found through DNA back-capture and the police once again required to formalise paperwork and facilitate his arrest.

All weekend, I knew, and he didn’t, that an arrest was about to happen.  Instead of feeling elated I felt a terrible sadness at the waste of his life, from boy to man, in and out of corrective institutions’ revolving doors. A profound grief that we put people right outside society where there is no way back into the fold.  Over and over again I played God’s Hotel that weekend, to help articulate and move these feelings through.

Nearly another year passed before he was sentenced to nine years, seven with parole.  God’s Hotel was joined by How To Make Gravy for obvious reasons. When I heard Paul Kelly play it live some years after that in a vineyard (huge queue, definitely not free now) I couldn’t stop the tears from seeping down my face from behind my dark glasses.

I mobilised on my emotions about incarceration by volunteering to attend a restorative justice Sycamore Tree program in a Perth prison.  I took in a CD and played God’s Hotel and read out my diary entry of how I had felt about the perpetrator being arrested, and cried. A few of the prisoners cried, too. One talked about how he couldn’t ever imagine a victim of crime feeling sad about the lot of the prisoner.

Still, How To Make Gravy  haunted me, encouraging me to take the step of doing a Victim Offender Mediation conference with the unknown perpetrator.

And finally, in his sixth year in prison, I did. I had spent much of the intervening six years feeing that profound loss on his part, for being completely shut out of society. I shared this with very few people as it was an unacceptable feeling. Everyone wanted him dead, or thought about him as little as possible. I could seep tears listening to How to Make Gravy when no-one was looking. Or once, not that long before the actual mediation conference was organised, I startled my 11 year old daughter my crying quite loudly and impulsively in the car when it came on when we were driving home.

Neither was the Victim Offender Mediation Office, who had created a file for me six years earlier when I had mentioned I was thinking about doing a mediation conference. Every now and then they would touch base with me, ask me if the time was right, back away gently when they sensed my ambivalence.

So when I was sure, they dusted off the file, and just six weeks after startling my daughter, I was sitting opposite the faceless perpetrator, having a mediation conference. He was no longer faceless but I certainly would have walked past him in the street, I would not have known him at all. I had seen him once, six years earlier in the court room, but it was only a quick glance and his features hadn’t stayed with me.

I began the conversation by explaining why I was there, how I felt that the prison and legal system were somewhat flawed, and that I had always felt somewhat distressed by the whole situation. He listened, then when it was his turn to speak, he said he was sorry.

Then, he said how glad he was that he’d had a long sentence so that he could get clean, loosen the hold of the drugs that were threatening to kill him.

And just like that, the heavy feeling I had carried around for six years dissipated.

I can’t say that I never tear up when I hear How to Make Gravy  but I walked out of there a lighter woman.

I’ll end with a question: why he would break into my house and assault me rather than attend a drug rehabilitation service that would have rolled out the red recovery carpet? This is the conundrum I am still pondering to this day.